The Textile Crescent and the Making of Greenville, Part 1: Greenville Begins to Grow

Camperdown Mill on the Reedy River in downtown Greenville. Courtesy of the Greenville County Historical Society.

The Roots of Greenville County

What is now known as Greenville County was once home to Catawba and Cherokee nations, where the people hunted, farmed, and lived along the river banks. In 1770, the first white settler, Irish trader Richard Pearis, moved south from Virginia to the area. He obtained 100,000 acres of land from the Cherokee and set up a plantation along the Reedy River in what is now downtown. While Pearis’s name still resonates in Greenville — he is the namesake of Paris Mountain — his time here was nevertheless fairly short. During the Revolutionary War, he allied with the British and the Cherokee before his holdings were burned by Patriot soldiers.

After the war, the newly formed state of South Carolina began claiming Cherokee territory. Land parcels were given to Patriot soldiers as payment for their services. Early investors in the town included Thomas Brandon, who purchased 400 acres in 1784, and Lemuel Alston, who bought Brandon’s land, built a log courthouse and a court square, and a home called Prospect Hill. He later sold his land to Vardry McBee, who built the first schools and churches in the area, along with other necessities like a sawmill, a tannery, and a general store. Seven miles away, he built the area’s first cotton mill. It was not until after the Civil War, however, that the cotton mill industry took hold in Greenville, transforming the small upstate town into the self-proclaimed “Textile Center of the World.” (See “The History of Greenville” for more on Greenville’s early founding.)

In 1873, three investors from Boston arrived in Greenville with the plan to build a cotton mill right where the crop was grown. While the idea was not new, cotton manufacturing in the south had not yet taken hold. But Oscar H. Sampson, George S. Hall, and George Putnam were determined to make a go of it. By 1875, they were operating Greenville’s first mill, the Sampson and Putnam, which perched on the edge of Reedy Falls right downtown. The following year, they opened another mill on the other side of the river and renamed the whole operation the Camperdown Mills Company. The mills together employed between 50 and 75 operatives. By 1880, the mill was the second largest in South Carolina, employing more than 250 people and establishing Greenville’s first Mill Village, which included 119 homes and a boarding house. By 1907, the village housed 1,200 people.

While the Camperdown Mills enjoyed some success in their early years, fires and economic instability, including the depression of 1883 and the Great Depression in 1929, hampered their ability to stay profitable. Each of the two mills shut down and changed ownership multiple times over the course of the next few decades. The first mill closed permanently in 1923 and served as a storage facility for Furman University before it burned down in 1943. According to the Historical Marker Database, the cause of the fire was never officially identified, but rumor is that children used the old grounds as a secret clubhouse and left a candle burning after one of their meetings, causing the fire.

The second Camperdown Mill had a longer active life, continuing manufacturing off and on until 1956 when it closed its doors for the last time. Today, little of Camperdown remains beyond a few remnants of the structures in Reedy River Historic Park, and the memories of long-time residents and historians. The mills were demolished in 1959 to make way for the Camperdown Bridge, a four-lane highway that opened in 1960. The new bridge crossed Reedy Falls, obscuring it from view and becoming a haven “where thieves and robbers would flee after committing a crime,” Greenville’s present-day mayor, Knox White, told the Greenville News in 2014. Realizing the missed opportunity to showcase Reedy Falls, the women of the Carolina Foothills Garden Club, along with Mayor White, successfully campaigned to have the bridge removed in 2001. It was replaced in 2004 by an architectural gem — the single-suspension cable Liberty Bridge. The 355-foot pedestrian bridge now forms the heart of downtown’s entertainment and business hub and is one of the most recognizable landmarks of the city. 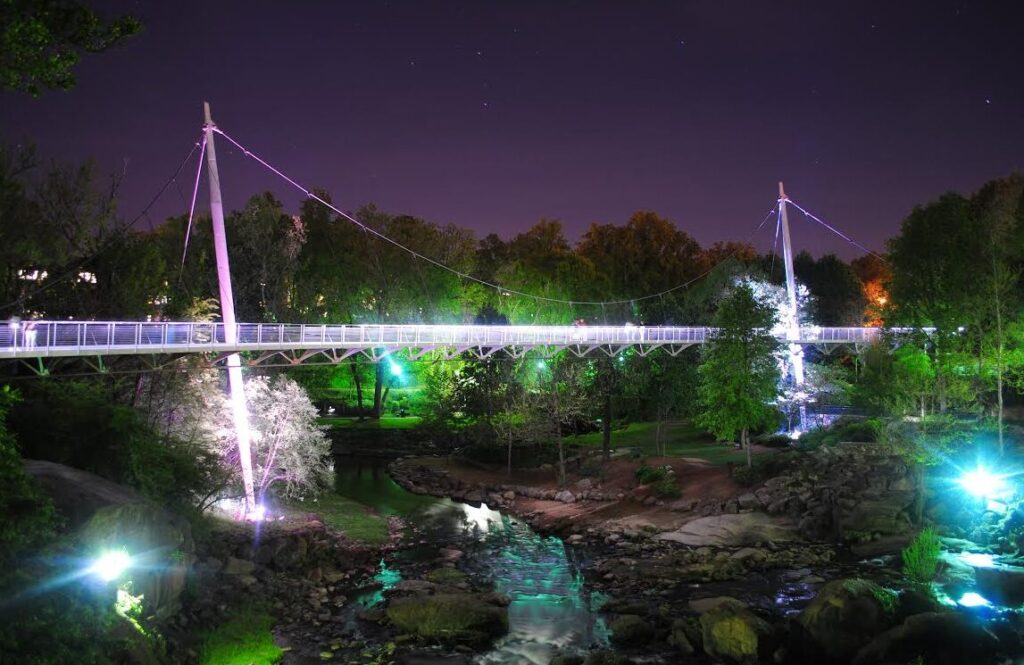 Far left: Camperdown Bridge shot from below. Photo by Josh Patterson available in the South Carolina Room at the Greenville County Hughes Library. Near left: Liberty Bridge over Falls Park, lit up at night. By Excel23, CC BY-SA 4.0, https://commons.wikimedia.org/w/index.php?curid=54655069.

From Camperdown to Piedmont Plush

Although Camperdown struggled to establish itself throughout the early 20th century, the idea of bringing manufacturing south and to the Greenville area nevertheless caught on. In 1882, Charles Lanneau founded the Huguenot Mill, which was the first mill in the state to manufacture plaid and gingham along with cotton. In 1894, the Sampson Mill, later known as the American Spinning Company, opened its doors, and F. W. Poe Manufacturing Company and the Mills Manufacturing Company both opened their mills in 1895. Mills Mill began operating in 1897 and Dunean opened its doors in 1912. In 1925, Piedmont Plush was built, making it the last of a total of 16 major mills and two bleacherys to be built in Greenville.

Most of these operations built an accompanying Mill Village for the mill operatives at the same time that the mills were built. Ellison Adger Smyth, for example, built 585 homes for Dunean Mill operatives in 1912. All of these homes still exist today — as does much of the village’s original infrastructure, including its deteriorating clay sewer pipes. MetroConnects is excited to begin sewer infrastructure rehabilitation work urgently needed on these systems, as well as wastewater systems in the Mills Mill area, using the $3 million American Rescue Plan grant it was awarded by the Greenville County Council in September.

Early Laborers Who Made the Mills

Like in much of the south, Greenville owes its early wealth to the unpaid labor of the enslaved who worked local cotton fields. Greenville made it through the Civil War relatively unscathed compared to the midlands and low country. Its economy continued to grow in the postbellum years, largely based on the cheap labor of freed Black sharecroppers, who continued to work the cotton fields, and “convict laborers,” who were most often Black and arrested for crimes as petty as loitering, stealing food and walking on grass. The imprisoned men were “leased” out to perform manual labor under dangerous conditions on chain gangs. It was mostly through their hands that Greenville’s railways, factories, roads, sewer and water systems were built. Convict laborers also likely made up at least part of the mixed-race construction crews that built the early mills.

After the mills began operating at the turn of the 20th century, Black workers were barred from all but the most menial and dangerous tasks in the mills. Instead, poor white laborers were recruited from nearby farms and the Appalachian mountains, where the crop-lien system was proving to be untenable. Many of these tenant farmers or small landowners hoped to use their wages to finance a return to the autonomy of farm life, but that was a distant dream for most. Wages in the mills were low, hours were long, and work was physically demanding. Often, whole families, including women and children as young as ten, worked in the mills to make ends meet. A U.S. Census reported in 1900 that 30 percent of the operatives in South Carolina mills were under the age of 16.

As difficult as life was, however, many mill workers found stability and relative material comfort at the mills in comparison to farm life. Mill owners understood that happy workers were hard workers, and so they ensured that all their basic needs were met by building fully self-sustaining Mill Villages. The village included housing, a general store, two churches, a community center, and a school. Later, some of the villages included luxuries such as skating rinks, bowling alleys, and playing fields. The Textile Baseball League got its start in the villages, and there were even women’s basketball teams and marching bands. While life was far from perfect, the villages today are remembered as spaces where families and community members worked hard, but worked hard together. 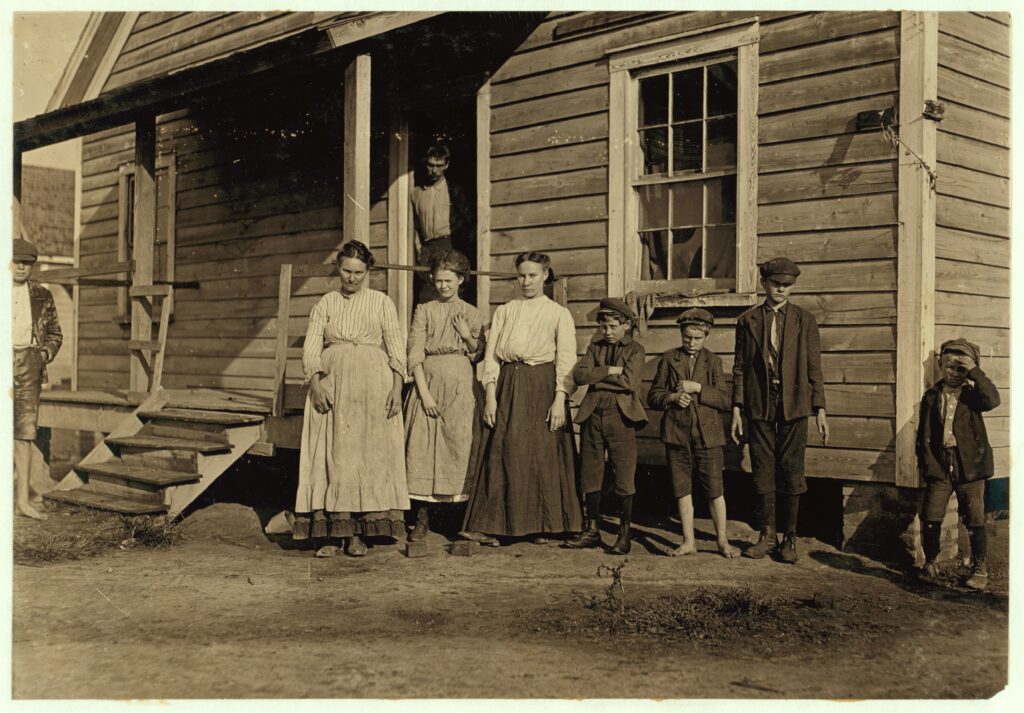 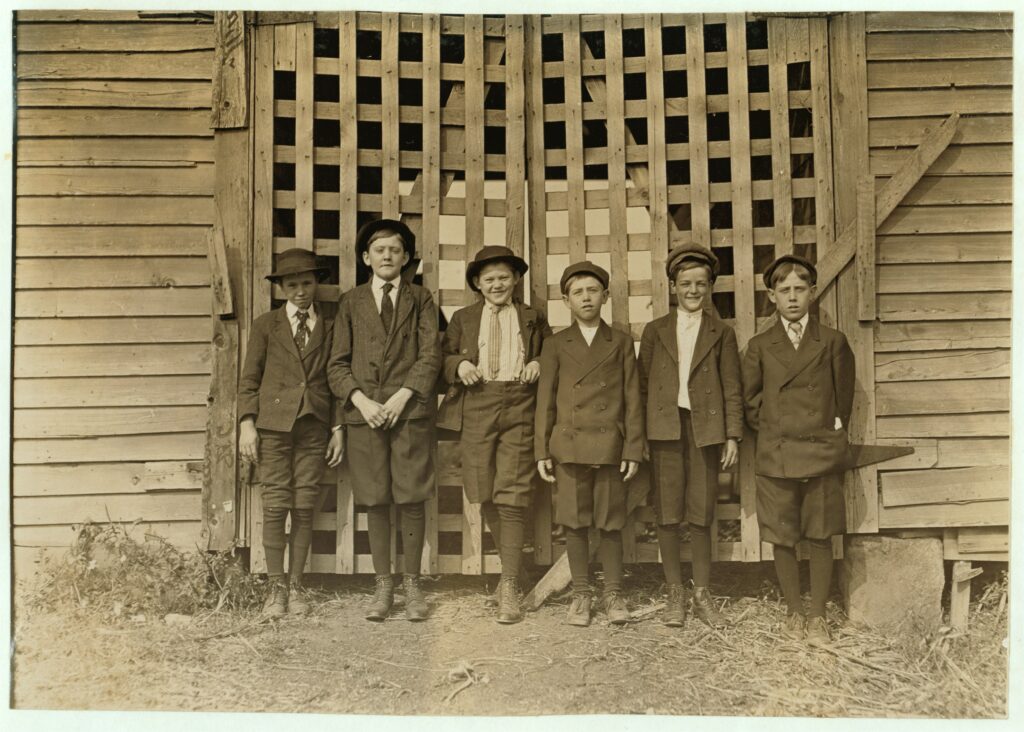 Near right: A Carolina family stands in front of their Mill Village home, 1908. Each of the family members worked at the mill. Far right: Near right: Boys who lived and worked in a Carolina Mill Village heading home from Sunday school, 1908. Courtesy of the Lewis Wickes Hine National Child Labor Committee Collection – Library of Congress.

Learn more about life in the Mill Villages in our next installment of The Textile Crescent and the Making of Greenville. Sign up for MetroConnects’ newsletter at www.metroconnects/newsletter so you don’t miss a post!