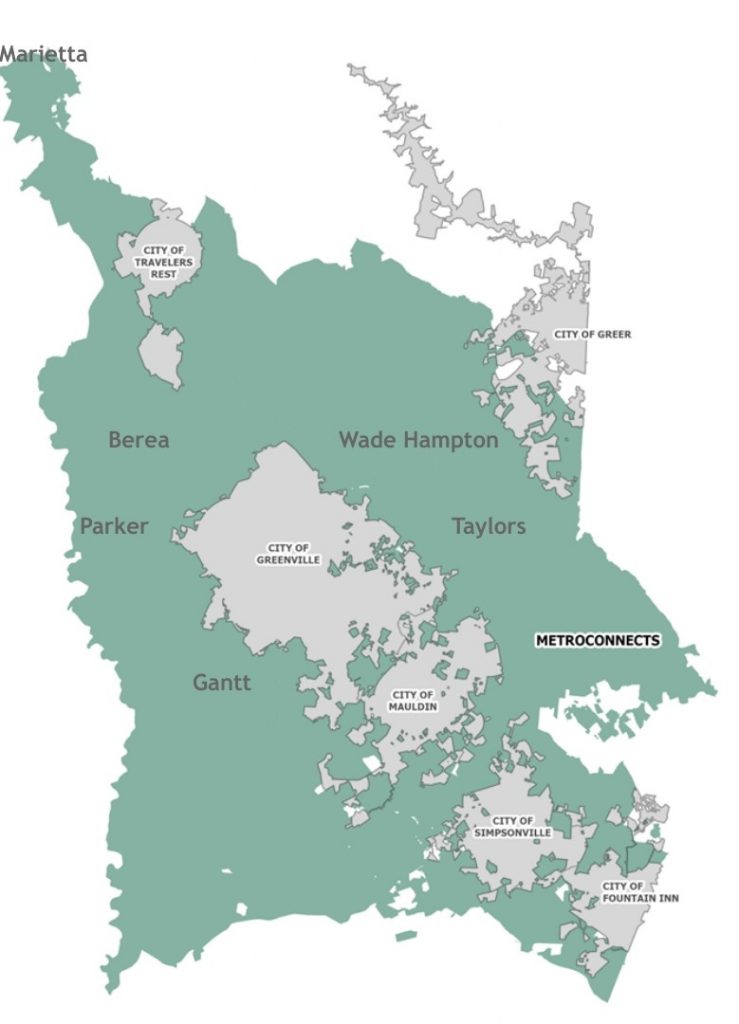 MetroConnects has begun two major rehabilitation projects in the historic Wade Hampton and Gantt districts. The projects are part of a larger effort by MetroConnects to rehabilitate sewer systems throughout Greenville County that are in failing or poor condition. In Wade Hampton and Gantt, existing sewer systems include deteriorating clay pipe sewers and service laterals, and leaky brick manholes, much of which was installed more than 50 years ago. Recognizing the need for immediate rehabilitation, the South Carolina Rural Infrastructure Authority (RIA) awarded MetroConnects two $500,000 grants to perform the much needed work. The total cost of the projects is estimated to be $2.8 million each, for a total of $5.6 million.

Cracks in the System

Older clay pipes and laterals are particularly vulnerable to cracks and root intrusion, and brick manholes often have issues with leaks. The pipes and manholes in Wade Hampton and Gantt are no exception, leading to repeated sanitary sewer overflows and wastewater leakage into groundwater, which poses environmental and health hazards. Studies have also shown significant issues at these sites with what is called “Inflow and Infiltration,” or “I&I.”

I&I refers to groundwater and rainwater that enters sewer pipes through cracks, deteriorated joints, and leaky manholes. In Greenville County, that extra water travels through the pipes via gravity and enters the wastewater treatment facilities operated by ReWa. Under normal circumstances, excess I&I stresses wastewater treatment facilities by forcing them to process excess water that normally would not need to be treated. This can lead to increases in the cost of wastewater treatment. More alarming, excess I&I can cause backups in homes and businesses, requiring expensive repair and clean up, and sewage overflows, which can cause significant damage to local environments and downriver water sources. (To learn more about the hazards of aging infrastructure see “What Can We Learn from Jackson? Mississippi’s Water Crisis is an Infrastructure Wake-up Call” Part 1 and Part 2.)

Recognizing the need to quickly rehabilitate sanitary sewer systems in the Greenville area, RIA issued MetroConnects two grants, one in 2021 and one in 2022, equaling a total of $1 million to perform this work. In the Gantt area, MetroConnects will rehabilitate approximately 60,500 feet of clay sewer, 170 brick manholes, and 100 clay service laterals. In Wade Hampton, MetroConnects will rehab or replace approximately 20,000 feet of clay sewer pipes, 80 brick manholes, and 110 clay service laterals. In both locations, Metro will use state-of-the-art technology, including CCTV cameras to inspect pipes, and cured-in-place pipe lining (CIPP), which rehabilitates existing pipes by lining them with a resin and epoxy mix to create a “pipe-within-a-pipe.” The goal of each of the projects is to reduce I&I in the Gantt area by at least 28 percent and in the Wade Hampton areas by at least 65 percent. The work will also reduce routine maintenance issues, such as household and business sewer backups. Residents and businesses in the Gantt area are bordered by Augusta Road, Pleasantburg Drive, Ridgeway Road, and White Horse Road, and residents and businesses in the Wade Hampton area are bordered by Wade Hampton Boulevard, Edwards and Howell Roads, Elaine Avenue, and Chantilly Drive, will all benefit from these improvements.

Stay tuned to MetroConnects’ blog for updates on these historic infrastructure rehabilitation projects! Sign up for our newsletter to never miss a post.

In 2019, Greenville County began considering consolidating its disparate sewer collection systems in order to better manage and meet wastewater infrastructure needs. At the time, sewer collection systems services were spread across 14 entities in the county, including Wade Hampton Sewer and Fire District, and Gantt Fire, Police and Sewer District. After much study and public debate, the Greenville County Council agreed to consolidate six of these entities’ sewer systems into MetroConnects, which can now concentrate its capital and human resources into improvements in areas, such as Gantt and Wade Hampton. Consolidation has also allowed MetroConnects to seek local, state, and federal funding for sewer infrastructure improvement projects, including the $1 million in grants it received from the SC Rural Infrastructure Authority for the Gantt and Wade Hampton projects.

Understanding Your Lateral: Why it Matters to You