What Can We Learn from Jackson? Mississippi’s Water Crisis is an Infrastructure Wake up Call: Part 2

Continued from “What Can We Learn from Jackson? Mississippi’s Water Crisis is an Infrastructure Wake up Call: Part 1”

Jackson is Not Alone

While the crisis in Jackson might appear to be an extreme example of the collision of infrastructural and legislative failure, experts say that cities across the country face similar challenges. Aging and inadequate infrastructure is a problem nationwide, as is increased extreme weather conditions that cause flooding and freezes. In an interview for the podcast Today, Explained, Darren Olson, vice chair of the ASCE infrastructure report, said that problems similar to Jackson’s are occurring throughout the country. Flint, Michigan’s well-known water crisis in 2014 stemmed from inadequate treatment of source water, which then traveled through aging lead pipes and exposed more than 100,000 people to elevated levels of lead. Just last week, residents in West Baltimore were under a boil water advisory after E. coli was found in the city’s drinking water. In Illinois, the small village of Dixmoor has been under boil water notices and has lacked consistent access to tap water throughout the year, primarily due to breaks in aging water mains. Like Jackson, residents in West Baltimore and Dixmoor are predominantly African American, with median household incomes well below the national average.

Dixmoor’s problems are compounded by its small size — its population was only 3,570 in 2020 — and lack of access to resources to help improve its infrastructure. “I’m waiting for the governor to step in,” Dixmoor Village President Fitzgerald Roberts told Maher Kawash of ABC Chicago. “I wish he’d file a disaster because really it’s a disaster — soon as you fix one pipe the other pipe blows up.”

Here in South Carolina, the need to replace and repair vulnerable systems is urgent. Earlier this year, residents in Columbia were repeatedly under boil water advisories due to water main breaks, and in Greenville, an 84-year-old pipe burst in February, creating a sinkhole and flooding downtown streets. Overall, the state scored a D and D+ for wastewater and drinking water, respectively. According to South Carolina Department of Health and Environmental Control (SCDHEC), more than 600 wastewater overflows are reported in the state each year, some of which stem from degraded pipes and stormwater infiltration into sewers, much like what occurred in Jackson. In Greenville, multiple sewer systems, particularly in unincorporated areas of the county, have fallen under disrepair for decades. Sewage systems in historic mill communities like Mills Mill Village and Dunean Village are more than 100 years old. Like Dixmoor, these communities have been designated as disadvantaged due to high poverty rates, among other factors, and have historically experienced significant sewage overflows, which pose health and environmental risks.

What We Can Learn

Media scrutiny of the latest disaster in Jackson prompted increased federal and state attention to the condition of the city’s infrastructure. The Environmental Protection Agency launched an investigation and has committed to a coordinated response to help with the crisis. But what is needed, Mayor Lumumba says, is serious funding commitments. The $42 million allocated from the American Rescue Plan Act is “insufficient to meet the great need of 30 years of deferred maintenance and accumulated challenges,” he said on CBS’s “Face the Nation” recently. Other municipalities express similar sentiments. “Unless we can pump enough money into these communities, we’re going to continue to have these problems,” Deborah Sims, a commissioner covering the Dixmoor district, told Kawash.

But with funding, there also needs to be planning. In Jackson, nothing is off the table, including privatization, according to Reeves. However, Jackson’s recent disastrous attempt to privatize its water systems, along with concerns about poor track records of privatized utilities nationwide, leaves many seeking alternatives. The Greater Jackson Chamber Partnership, for example, is calling 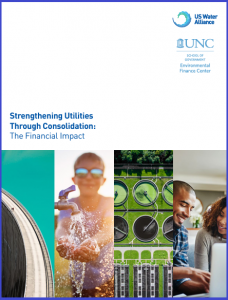 for the creation of a regional authority to govern the water system. While Lumumba has expressed concern that regionalization could continue the trend of deprioritizing Jackson’s needs, studies have shown that the consolidation of public resources has a positive impact on underserved utility systems. A joint study by the U.S. Water Alliance and UNC Wilmington found that regionalization, consolidation, and partnerships can significantly improve the efficiency and effectiveness of utilities by pooling capital resources, technological expertise and personnel. One potential downside to regionalization is increased costs in utility fees to some customers in the short term as infrastructure upgrades begin. But, the study says, these upfront costs help to avoid a “cascade” of future costs when systems fail. Those long-term savings can then be passed on to customers, along with the benefits of improved health and environmental conditions, and the avoidance of disasters like those in Jackson, Baltimore and Dixmoor.

Greenville County has recently taken steps to head off infrastructural failure in its wastewater sector, consolidating six of its sanitary sewer collection systems under Metropolitan Sewer Subdistrict, dba MetroConnects. MetroConnects is a special purpose district established through state legislation in 1969 for the purpose of providing sewer collection service within the unincorporated areas of Greenville County. With this consolidation, MetroConnects is able to pool its capital resources and workforce to maintain and upgrade more than 1,400 miles of sewer line. By rehabilitating and replacing degraded sewer lines, MetroConnects will help to reduce the frequency and severity of sewer overflow events, helping to head off future disasters that would significantly impact community health, business operations and the economy.

Needs are significant, however, and the work is only just beginning. As MetroConnects has grown, it has been able to devote resources toward seeking competitive grants to fund its capital improvement projects and decrease the financial burden on utility payers. This year alone, MetroConnects has secured more than $500,000 from the South Carolina Rural Infrastructure Authority, and it was recently allocated $3 million of Greenville County’s ARPA funds by the County Council. It is in the process of applying for South Carolina Infrastructure Investment Program funds to help offset the costs of Mills Mill Village and Dunean Village rehabilitation projects, which are estimated to be more than $10 million each. With the lessons of Jackson fresh in mind, MetroConnects is committed to the critical work of upgrading wastewater infrastructure and protecting the communities it serves.

The Textile Crescent and the Making of Greenville, Part 1: Greenville Begins to Grow

Introducing “The Textile Crescent and the Making of Greenville County”