What Can We Learn from Jackson? Mississippi’s Water Crisis is an Infrastructure Wake up Call: Part 1

Stories of the water crisis in Jackson, Miss., have dominated the news since late August this year. “Jackson Water System is Failing,” “Residents Told to Shower with Mouths Closed,” and “‘All of a sudden, it’s undrinkable’” early headlines declared. Other headlines soon pointed out that the crisis should not have come as a shock to anyone: “Everyone Knew Jackson Water Crisis was Coming” and “Water Crisis has been decades in the making.” Jackson Mayor Chokwe Antar Lumumba said that he has been seeking help from the state for more than two years, but little had been done to repair the city’s crumbling water infrastructure. As politicians scramble to point fingers at who is to blame and outsiders wonder how this could happen, one thing has become clear: The water crisis in Jackson has a long history.

According to the American Society of Civil Engineers (ASCE), 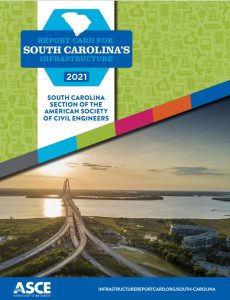 the U.S. infrastructure score in 2021 was a C-. Within the 17 infrastructure categories it assesses, the intertwined systems of drinking water, stormwater, and wastewater received a C-, D, and D+, respectively. In South Carolina drinking water score drops to a D+ and its wastewater score goes down to a D (stormwater infrastructure was not reported for South Carolina). According to the ASCE report, the nation’s more than 16,000 wastewater treatment plants are functioning at only 81 percent of their capacity, and 15 percent have reached or exceeded it. Funding for capital improvement projects to prevent sanitary sewer overflows has slowed in recent years, and many of the sewer networks in the United States are reaching the end of their useful lifespans. Technological innovation has improved the efficiency of maintaining and building water and wastewater infrastructure, but funding over the last 50 years has shifted from federal sources allocated through the 1972 Clean Water Act, to local municipalities, many of

which are operating with limited resources. The situation worsens in rural communities, communities of color, and low-income communities, which are often neglected at the state and federal levels, and whose resources are limited by lower tax revenue. Municipalities in these areas also often lack staff and expertise to compete for outside grant funding to supplement tax revenue and usage fees. The ASCE estimates that $2.6 trillion is needed to bring the overall infrastructure score in the United States from a C- to a B.

One City’s History of Struggle

In Jackson, local water utilities have been unable to keep up with the city’s infrastructural needs. More than 30 years ago, a study showed that many of the 1,400 water systems that existed in Mississippi at the time had little useful life left in them, especially the smaller and private systems that snaked through Jackson. Little was done to address the issue, and in February of 2021, 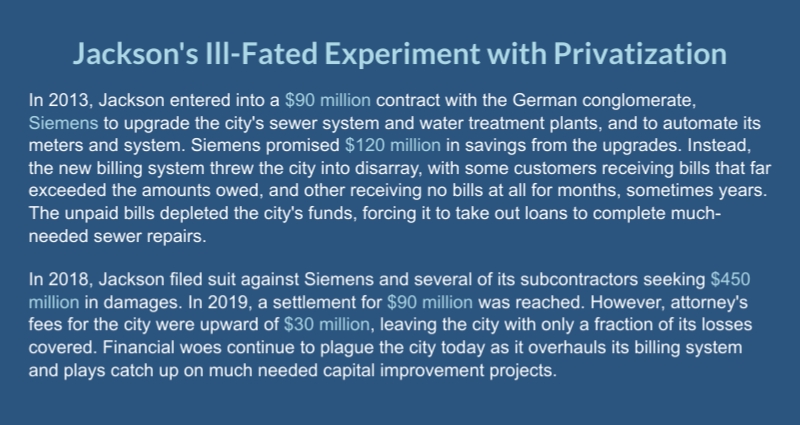 Jackson experienced an extreme freeze that caused water mains to burst and already strained water treatment equipment to fail. In March, Lumumba appealed to Gov. Tate Reeves, warning of the critical need for immediate repair and improvement of the city’s water distribution system, and seeking help to obtain $47 million in funding. But the state showed little interest in stepping in.

In March 2021, Reeves said that the city needed to improve its billing system and work harder at “collecting their water bill payments before they start going and asking everyone else to pony up more money.” In an area where the median household income is about 20 percent less than the median income of households across the rest of the United States, residents are unlikely to be able to cover the estimated $1 billion needed for infrastructure repairs, especially when many customers have gone years without reliable water service. Exacerbating the problem further is an unstable pricing system that left some residents with sticker shock when bills began appearing that topped $1,000.

Fast forward to August 2022, when the southeastern United States experienced several days of torrential rain (residents in the Upstate might remember a series of flash flood warnings over Labor Day weekend that resulted from the storm system). Flood water overwhelmed Jackson’s sewer system and introduced excess chemicals into the 85-year-old wastewater treatment plant, further slowing a process that already struggled due to outdated equipment. The water treatment plant simply could not produce enough clean water to fill the city’s tanks. Water pressure dropped, and for days, residents had no access to running water. In the meantime, water that was already in the pipes sat unmoving, allowing time for bacteria to grow (for more on this, listen to Today, Explained: “The Water Crisis in Jackson, Mississippi.”) While water pressure has now been restored, the bacteria continues to make the water undrinkable. The boil water advisory was finally lifted Sept. 15, but many residents say their water remains cloudy and undrinkable. What has resulted is the prolonged disruption to businesses and schooling as residents are forced to stock up on bottled water, either by purchasing it on their own or seeking it through emergency resources. For some without transportation, there is no option but to ignore the advisory and risk drinking what comes from the tap.

For more on the national infrastructure emergency and possible solutions, see What Can We Learn from Jackson? Mississippi’s Water Crisis is an Infrastructure Wake up Call: Part 2.